Chrysopelea is most commonly known as the flying tree snake or gliding snake. They are a genus of the family Colubridae, the largest snake family to 51% of all known living snakes. There are five species of flying snakes, which inhabit jungles, forests, and woodlands of South and Southeast Asia. These colorful snakes do not actually fly, but they do in fact glide. They are known to travel more than 100-meters in just a single glide, which amounts to about 8-10-meters per second. How amazing is that?  Although these snakes are venomous, they have tiny, fixed rear fangs that make them harmless to humans. They are also known to be popular in the pet trade in Europe. 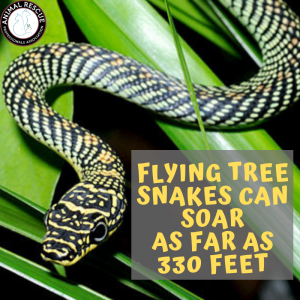