Our next myth is one again that seems to be perpetuated by perception and not reality.  I’m not sure if this myth was started because of any particular person or rescue, but it seems to keep going despite many campaigns on Facebook and other social medias to try and debunk it.  The perception is that the strays are turned into shelters, rescues pull from the shelters and get the animals for free or next to nothing.  Then they turn around and adopt them out for hundreds of dollars in adoption fees.

Fact: Rescue animals cost hundreds if not thousands by the time they are adopted out.  Stop for a moment and think about the complete supply chain of how the animal got to the rescue, and then to the final adopter.  The animal may have been an owner surrender to a shelter, or might have been picked up as a stray.  Either way, in order to first extract that animal from the shelter, the costs that the shelter put into the animal must be recovered.  After all they have to be financially viable as well in order to keep operating even if they receive municipal funding.  But don’t forget about the costs that were likely incurred by the shelter in order to get or keep the animal healthy.  If the animal was not spayed or neutered that is usually the first thing the shelter does.  And that surgery costs money.  If the animal was injured or sick there are vet bills and medications to be covered which also have costs.  Finally, often referred to as a “pull fee,” there is an administrative fee for processing the animal out of the shelter to a rescue or volunteer.  This fee generally covers things such as food for the animals and overhead costs of the facility.  So now the animal is out of the shelter and into the arms of a rescue.  Now what?  Well if the rescue is lucky enough to have foster homes set up, they likely place the animal into a foster home.  But this relationship whereby the foster is giving the animal a roof is not always free.  Generally the rescue is paying for the food, vet bills and medications (both prescribed and OTC) in order to keep the animal healthy until a forever home is found and the animal is adopted out.

Some rescues do a great job of maintaining their cost of goods sold or costs incurred for each animal.  Others not so much.  Perhaps this is where this myth comes from.  After all if you do not demonstrate the costs incurred, then the assumption is that you didn’t have any right?

What’s your take?  What’s the average cost you spend on an animal before they are adopted?  Let us know. 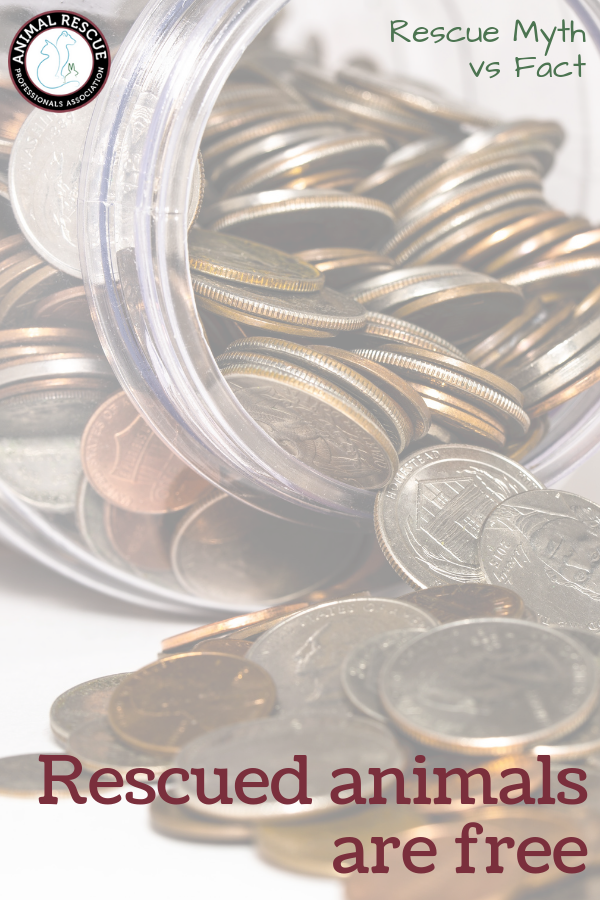