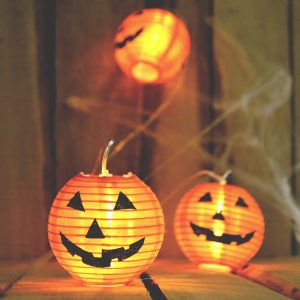 Scary decorations are up, pumpkins are carved, and fridges are stocked with treats—Halloween is finally here!  Everyone can transform into whatever character they want and participate in numerous Halloween activities. Children are excited to go trick-or-treating around the neighborhood, while teens and adults are looking forward to attending parties, getting spooked inside haunted houses, or simply just handing out candies and chocolates to trick-or-treaters.

If you’re a pet owner, we’re sure that you won’t leave Fido out of your Halloween plans. You might even have a cute outfit prepared for them already. The question is, have you taken the necessary precautions to keep them safe during the celebration? Most people may not be aware, but something as simple as ingesting candy or a chocolate bar can put your furry companion in the animal hospital. With that said, we’ve compiled everything you need to know about the dangers of Halloween for pets and how you can protect your little buddy throughout the holiday.

The odds of animals accidentally ingesting or getting into stuff that they shouldn’t increase during Halloween. In fact, Pet Poison Helpline says that they’re at their busiest during the spook-filled holiday. According to them, the six most common things that put pets in danger on Halloween chocolate, candies, raisins, grapes, costumes, and candles.

On Halloween, humans often look forward to getting a ton of chocolates. However, no matter how many you end up taking home, it’s never a good idea to share them with your pet. Chocolate or cocoa contains a substance known as theobromine, which is a stimulant that’s found to be incredibly toxic to animals. Humans may have no trouble digesting it, but animals lack the enzyme to do so. For some pets, even small amounts can lead to death.

Candies are high in sugar and fat. When eaten in large amounts, they can cause pancreatitis (inflammation of the pancreas) in pets. In addition to that, candies may also contain xylitol, which is a chemical that’s highly poisonous to animals.

Chocolates and candies can sometimes contain raisins or grapes, making them even more dangerous to your pet. Raisins and grapes are known to cause severe kidney failure in animals and no amount is safe. Before giving any kind of food to your pet, always check the ingredients for anything toxic.

Bright glow sticks and glow jewelry can easily capture the attention of curious pets. They can mistake it as a chew toy and accidentally swallow the toxic fluid inside, as well as some of the plastic particles that break off. Not only are glow sticks and glow jewelry potential choking hazards, but they’re filled with a substance that can cause severe mouth irritation, inflammation, or pain.

You’re probably excited to put your pet inside an adorable Halloween costume, but before you do, make sure that they’re 100% comfortable wearing it. It’s best that you let them try it on before the big day and see how they react. Doing this can help acclimate them to the outfit and give you time to make changes if they end up not being on-board with whatever you’ve already picked out.

If no matter what you do, your pet just doesn’t want to play along, then it’s best to leave them be. Never force them to wear a costume if they don’t want to or if the outfit clearly makes them feel uncomfortable. Doing so can put your pet in a lot of stress, which can be very emotionally and mentally damaging to them.

With the abundance of candlelit decorations, such as jack-o-lanterns, it’s so easy for pets to get their noses, tails, fur, or even costumes, burned. If you plan on taking your pet out with you on Halloween, never let them loose. Keep them close to you at all times.

5 Ways to Keep Your Pet Safe On Halloween

1. Make sure that your pet has a microchip

Whether you’re planning to take your pet out with you during the Halloween celebration or leaving them at home, it’s best they’re microchipped or at least have an ID on them. With all the people out during the holiday and the constant opening and closing of the door, it’s so easy for pets to run off. Having the proper identification increases their chances of finding their way back to you should they escape or become lost.

2. Keep your pet in a secure area indoors

If you’re letting your pet stay at home, you can keep them inside a separate room, away from the door. This can keep them from getting stressed or darting outside every time trick-or-treaters come and go.

3. Keep your pet away from electronic or battery-powered decorations

Halloween wouldn’t be Halloween without creepy decorations, but as enjoyable as they are for us humans, they can be a danger to pets. If your furry friend likes to chew on wires and electrical cords, they can get themselves electrocuted or burned. Batteries, when chewed open, can also cause chemical burns inside the gastrointestinal tract. Aside from that, your pet might even swallow pieces of plastic, glass, wood, or any other material from various Halloween decorations.

4. Never force your pet to wear a costume

Forcing your pet to wear a costume even if they clearly don’t want to can cause them a great deal of stress. Only put them in an outfit that they don’t mind wearing. Make sure that you pick one that doesn’t restrain them in any away, allows them to move freely, hear and see clearly, and most importantly, breathe normally.

Costumes that cover your pet’s head or face is never advisable. If you have a dog, muzzles or anything that will keep your pooch from opening their mouths is a huge no-no, especially if you’re bringing them out into a crowded area. Dogs open their mouths and pant to regulate body temperature. If they can’t do that, they’re body can overheat and your pet could suffer a heatstroke.

5. Don’t allow your pet to go near any plant décor

Keep your pet away from plant decorations, like jack-o-lantern pumpkins or corn, because you never know what’s in them. They can contain harmful substances like paint or toxic adhesives, which can cause poisoning. They may have also turned moldy, which is especially dangerous when ingested because, according to PetMD, some types of mold produce mycotoxins—chemical substances that can cause neurological problems, like tremors and seizures.

No matter what your plans are for Halloween, we hope that you keep in mind the things you learned from this article and celebrate the holiday with your pet’s safety in mind!