The best time to learn about the serious disease that can impact cats and dogs everywhere.  The American Heartworm Society defines heartworm as, “a disease caused by foot-long worms that live in the hearts, lungs, and associated blood vessels of affected pets, causing severe lung disease, heart failure, and damage to other organs in the body.”  Heartworm disease can affect an animal’s health and quality of life even long after the parasites are gone, so it is important to prevent the disease to give an animal the best chance at life!

How do animals get heartworm? 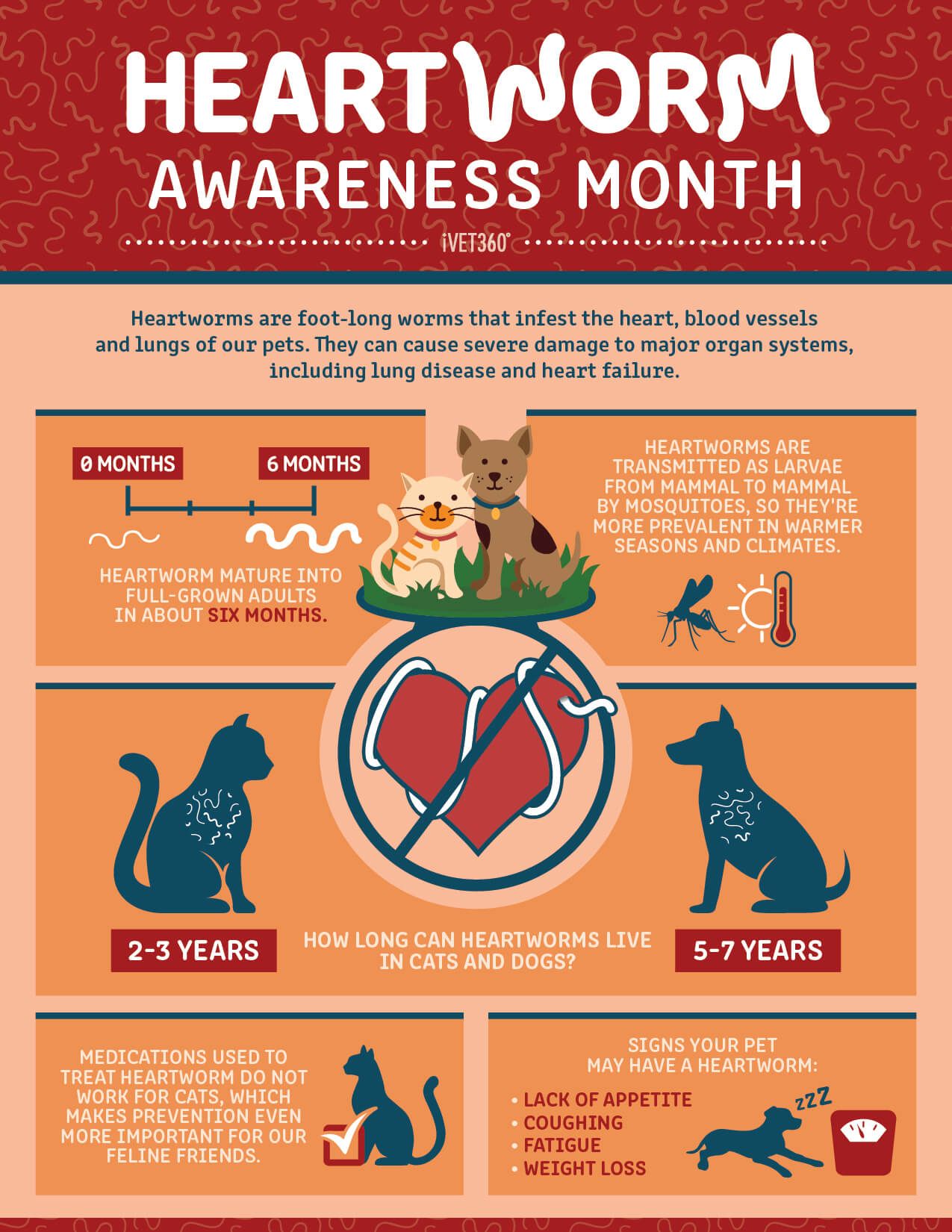 Heartworm is passed from host to host by the mosquito.  All it takes is one small bite from the insect and the parasite can enter a pet’s bloodstream.  Adult female heartworms living in an infected dog, fox, coyote, or wolf produce microscopic baby worms called microfilaria that circulate in the bloodstream.  When a mosquito takes a blood meal, it picks up the baby worms that develop into the “infective stage”. Then, when the mosquito bites another animal, the infective larvae are deposited to the new animal.  Once inside the new host, the heartworm larvae take about 6 months to mature into adults and can live for 5-7 years in dogs and 2-3 years in cats.

Dogs are a natural host for heartworms.  This means that heartworms can live and mature into adults, mate and produce offspring in a dog’s body.  The worms can cause long-term damage to the heart, lungs, and arteries, and the disease can be fatal if left untreated.  Heartworm disease is far worse in dogs than it is in cats, as dogs can harbor hundreds of worms at a time.  It only takes a few worms to cause serious damage, so just imagine what hundreds can do to a dog’s body!

Cats are not a normal host for heartworms and most larvae do not mature into adult worms.  Cats usually only have one to three worms at a time, compared to dogs which can have hundreds.  Since most worms do not reach the adult stage in cats, heartworm disease is often undiagnosed and cats do not always show symptoms of an infestation.  However, even immature worms can cause damage known as Heartworm Associated Respiratory Disease (HARD).  This term is used to describe the coughing and the difficulty breathing that is caused by the presence of the worms.  Medication used to treat dogs cannot be used in cats and there is no approved medication specifically for treating felines.  That being said, prevention is the only way to protect cats from heartworm disease.

What are the signs & symptoms of heartworm disease?

Dogs- In the early stages, many dogs show few to no symptoms at all.  As time goes on, signs may include a mild but persistent cough, lethargy, no energy for exercise,  fatigue after moderate activity, decreased appetite, a swollen belly due to excess fluid in the abdomen, and weight loss.  At the late stages of the disease, dogs with a large number of worms can develop blockages of blood flow in the heart.  This is called caval syndrome, and it is characterized by pale gums, dark, bloody urine, and hard breathing.

Cats- Some cats do not exhibit symptoms of the disease, however, common signs to look for include coughing, asthma-like attacks, vomiting, lack of appetite, or weight loss.  Occasionally, cats may exhibit more severe symptoms including fainting or seizures, fluid in the abdomen, or difficulty walking. Unfortunately, the first sign of an infestation in some cases is sudden collapse or death.

How many of these facts do you already know?

1. Heartworm has been reported in all 50 states.

2. Heartworms live in other mammal species such as foxes, wolves, coyotes, and sea lions.

3. Cats have a 1 in 3 chance of naturally fighting off a heartworm infection.

4. About 100% of dogs exposed to heartworm larvae will develop an active infection.

5. It is recommended that cats older than 7 months of age be tested for heartworms before starting heartworm prevention.

6. One million dogs are estimated to have heartworm disease in the United States each year, but only 30% of them will be diagnosed by a veterinarian.

Have you had a pet that was diagnosed with heartworm?  Let us know about your experience in the comments below!