National Pickle Day is observed annually on November 14th. The history of the pickle goes way back to around 2030 B.C. when cucumbers were just starting to be pickled in India. Even though the food started in India, the Dutch are the ones who can take credit for the name. The original name, “peke,” translates to “brine.” Fitting, right? Whether you prefer Dill, Gherkin, Cornichon, Brined, Kosher Dill, Polish, Hungarian, Lime, Bread and Butter, Swedish, or Danish, grab a jar of your favorite type of pickles and celebrate today with a crunchy snack!

What Is A Pickle? 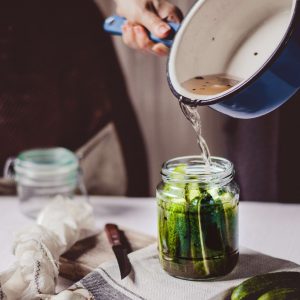 A pickle is a small cucumber that has been preserved in vinegar, brine, or a similar solution. Oftentimes, you need a cucumber, water, salt, and vinegar to make the tasty snack. All of these ingredients together prevent bacteria from growing and ruining the food, and this may actually be the reason that pickles originally became popular! Years ago, many people needed a food that could be stored for a long period of time. Pickles were even frequently taken on boats by sailors who needed food on long voyages.

Are Pickles Safe For Dogs To Eat?

You’re making a sandwich and take out a jar of pickles for a little added “crunch” on the side. You notice your pup sitting next you, ready for you to share. You think to yourself, “is it safe?”

Generally speaking, pickles are not harmful to dogs. However, pickles are extremely high in sodium and contain some ingredients that could be toxic to a dog.

Avoid pickles that are heavily spiced as they often contain seasonings which include substances toxic to dogs. For example, Bread and Butter pickles are made with cucumbers, brine, peppers, onions, garlic, sugar, and other spices. Garlic and onions are toxic to dogs, and could lead to a major upset stomach or even anemia. Additionally, Hot and Spicy pickles are made with cucumber, brine, chili pepper, and other hot spices, all of which could really harm a dog’s gastrointestinal tract.

If you look at the sodium content in your dog’s commercial feed, it will most likely consist of nearly 100% of the daily requirements a dog needs. That means your dog does not needed any added sodium from human food- especially not from a pickle. Extra sodium will not harm your dog if he or she ingests it occasionally.

Pickle juice should never be given to your dog! Pickle juice is made of vinegar, spices, and large quantities of salt. While some may recommend pickle juice for dehydrated dogs since it is full of electrolytes, this should never be an option. Even if you dilute the juice, the amount of sodium is immense and can do more damage than good. If your dog become dehydrated, contact your veterinarian immediately!

What is your favorite type of pickle?