June 12th is National Peanut Butter Cookie Day! While we all love the forked criss-cross cookies, there is still much discussion about why exactly dogs are also so crazy about peanut butter. Is it the smell, the taste, or the actual ingredients of sugar, salt, fat, and protein in the tasty treat that dogs love?

According to American Kennel Club, studies have shown that dogs have the same four taste bud classifications that humans do; they can identify sweet, sour, salty and bitter. Dogs also have taste buds geared specifically for water at the tip of the tongue where it curls as the animal drinks water.  The water taste buds always react to water, however, they are more sensitive after a dog consumes salty and sugary foods. The theory behind the water taste buds in dogs is that when animals are in the wild, they may need more water after eating food that might dehydrate them.

The Aroma of Sugar, Salt, and Protein

If it’s not the smell of meat, it could be the smell of sugar!  Dogs are omnivores-they eat both plants and animals and have a sensitivity for sweetness. This sensitivity is actually an instinct from the wild. Something sweet could mean a potential meal high in carbohydrates, ultimately equaling lots of energy.

Cautions and the Importance of Moderation 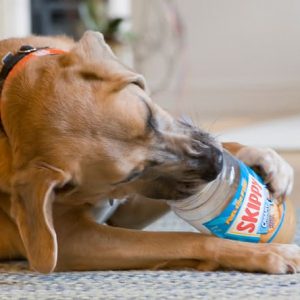 As with all treats, peanut butter should be given to your dog in moderation. While we’re sure that gobs and gobs of peanut butter would make your dog really happy, it could also cause several health concerns including obesity and pancreatitis.  Try homemade, unsalted, or unsweetened peanut butter instead of the regular store-bought kind. These alternative treats contain no added sugars, salts, or other chemicals that are bad for your dog.  Additionally, watch out for the ingredient Xylitol, as this is extremely toxic and fatal to dogs. Xylitol causes a release of insulin into a dog’s bloodstream which lowers blood sugar levels. This decrease in levels is also known as hypoglycemia and can occur in an hour or less after being consumed.

If you are looking for different ways to treat your dog with peanut butter, below are a few ideas to try:

3. Dog toys with peanut butter inside- Kong’s and other dog toys can be stuffed with a variety of treats. Your dog will spend time trying to lick the peanut butter out while staying entertained to allow you to get stuff done!

1. Arachibutyrophobia (pronounced A’-ra-kid-bu-ti-ro-pho-bi-a) is the fear of getting peanut butter stuck to the roof of your mouth.
2. Peanuts aren’t actually nuts- they’re legumes. That being said, it’s technically wrong to call it a nut butter.
3. It takes about 540 peanuts to make a 12-ounce jar of peanut butter.
4. According to Little Brownie Bakers, cookie bakers use about 230,000 pounds of peanut butter per week to bake Girl Scout’s Do-si-dos and Tagalongs.
5. George Washington Carver was known as the “plant doctor” and the “grandfather of peanuts”. Even though he did not invent peanut butter itself, he discovered several different ways to use peanuts.  Additionally, he came up with several innovative farming methods, including crop diversification and soil conservation.