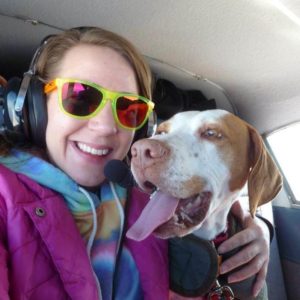 “It’s amazing to see the networking that comes together and the people pulling for each other...and the animals too!”

Amy is an animal rescue transport coordinator that got her start from her genuine love of animals. All of her own dogs have been rescue-based, and coordination fell into her lap when she started looking for ways to get involved in animal rescue. Amy selflessly helps the animals and one day hopes to have her very own animal rescue.

Q: If you were an animal, what would you be and why?
“I would have to say a horse because they’re just so strong, beautiful, and powerful. It would really be a unicorn but unicorns aren’t real so I’ll go with a horse!”

Q: How did your work with animal rescue transition into animal coordination?
“For me, I was just super excited and looking at the different avenues of the rescue world. I like being a part of it, I like being a part of the system, and so coordination sort of just fell into my lap. I succeed pretty well at it so I sort of just went with it! Every part of rescue is just as important as another, and I’m thankful to be a part of it.”

Q: What are some of the difficulties that come with the job?
“I think it’s difficult because it’s a lot of running around. In order to put a run sheet together you have to map it out, and then after mapping it out you put it in a nice little run sheet format, and then you have to distribute it. It’s also a matter of having to harass people and be like, ‘hey can you do this, can you not?’ It’s very time intensive and I think people don’t necessarily have that to give, so it’s a matter of finding those volunteers that can come and help out. The volunteers are all great- the probability of people coming together to fill runs is amazing. Sometimes its down to the wire- hours before you won’t be sure if you can do a transport.”

Q: Do you have any memorable stories?
“There was this woman around Indiana that really wanted to help out but was having a hardship and needed gas money. I didn’t mind that she asked for it but I said, ‘I don’t know if the rescue I am working with would be willing to do that.’ This was on one of the Facebook pages and a lady stepped up and said, ‘oh I’ll give you gas money, that’s no problem’, and it happened to be the lady that was dropping the dog off to her. At the end of the day, it was a leg I needed filled desperately, and the two of them connected because the woman was so willing to help her. Its stories like that with the volunteers that make everything happen. Its great that we are helping the dogs, but I don’t think people realize it’s a lot about the people who are involved too.”

Q: What keeps you motivated to keep doing what you’re doing since it is such a thankless job?
“I work in people rescue; I work on an ambulance full time and you lose your faith in humanity. I continue to do what I do because of stories like the one I just shared, or the moment that I get to fly, or when I get to take a very urgent dog and get him to a foster home. Things like that build me up and make me appreciate what I’m doing in my full time job and in life, and I think that’s what my driving force is. Knowing that I’m doing something good.”

Q: Do you have any advice for someone looking to become a coordinator?
“I think the best advice I can give someone is to just do it, just try. I think unless you do, you’re not going to know for sure. I remember when I was learning how to do the job it was very overwhelming. Be prepared because it will get really stressful, but in the end when you get a transport filled and a dog moved, it’s very rewarding.”

Amy is one among many selfless volunteers who offers her skills to better the lives of animals. For more information on animal transport and how to get involved, we recommend that you check out www.doobert.com. Doobert is the leading online resource for animal rescue transport and automates the process for the volunteers.