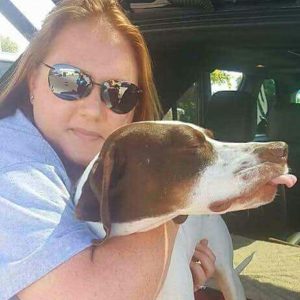 “Seeing pictures after a transport and realizing that you helped that animal…that’s exactly why I do this.”

Jessica is an animal transport coordinator who helped found the organization Pawsitively Famous (R.A.C.E) together with three other awesome volunteers. Their organization is funded through the R.A.C.E team with help from Miranda Lambert’s MuttNation Foundation pet charity fund. Jessica’s altruistic work is more of the behind-the-scenes action, but plays just as big a role as any other part of animal rescue.

Q: If you were an animal, what would you be and why?
“I would say a chipmunk because they’re really cute. No one wants to hurt anything really cute!”

Q: How did you get into animal rescue?
“We are all (R.A.C.E founders) fans of Miranda Lambert and that’s how we all met. We wanted to help raise money for the shelter that she supported in Texas before she became the mega-star that she is now. So, we started small by raising money for that. A couple years later when she’d gotten bigger, two of us officers, Karen and I, transported her keyboardist’s dog to his new home. Little did we know that would become R.A.C.E’s very first transport. He rode up to Columbia, MO from Texas on the band bus, and they handed him off to us after the show the following night in Iowa. We drove part of the way to Tom, another officer, and he drove to the new owner in OH. Since then, it’s just kind of taken off! We started doing more transports when Miranda opened her Redemption Ranch shelter in OK and have now done many, even cross-country.”

Q: How did you get into the coordination aspect of animal rescue?
“I was kind of thrown into it! I started driving for other transport groups and so I had seen run- sheets before. I basically learned on my own from those and the individuals that I drove for. When we (R.A.C.E) got into longer transports, we realized that we needed to coordinate these a little better. I think including a meet time between the legs is helpful, especially for new people. A lot of people don’t really think about that 10 or 15 minutes between the legs, and that’s a good time for you and the person in front of you to meet, talk about, and transfer the dog. I like to put that in there because it kind of keeps us on track, and I haven’t seen a lot of other coordinators include that actual meeting time on their runsheets.”

Q: What is your method for coordinating transports?
“I normally start with looking at Google Maps. I’ll start at the city where the animal is located and then at the ending spot. From there, I’ll start mapping out legs that are usually an hour or an hour and a half. Having a map to look at is the best starting point for me. On the run sheets I’ll have information on the dog, pictures, how they are around people and kids, and vaccination records, etc. Then I’ll put in the legs, cities they’re in, the breaks, and how far/long the driver will have to go. In the final runsheet I put all of the information on the drivers (phone, email, vehicle description) in but I won’t post that publicly.”

Q: Do you have a memorable story?
“One of my first transports was a little dog that had come from an abusive situation and he was just absolutely terrified. He basically just sat in the back seat of my car and just shook for the whole ride. He wouldn’t stand on the ground so I had to pick him up in order to get him into the next person’s car. I think I cried at least halfway home. Then a few days later, I saw pictures on Facebook of him up in his foster dad’s lap just chilling, watching TV.”

Jessica is just one of many amazing volunteers that dedicates her time to saving animals. For ways that you can get involved, we suggest you check out Doobert.com, the leading online resource for animal rescue transport that automates the process for the volunteers.