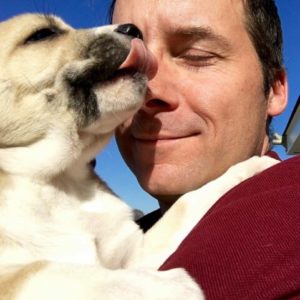 “I love the satisfaction of being able to give, and to do something in the animal rescue world because I have the ability to do so.”

Paul is an animal rescue pilot who started his training back in 2013, and has been saving animal lives ever since, one flight at a time. Paul knows better than anyone about the importance of quick problem solving in cases of inclement weather or aircraft failure, and he has encountered situations that one might only dream of! However, the outcome of a successful transport makes every road bump worthwhile to Paul!

Q: If you were an animal, what would you be and why?
“Oh a dog of course. Dogs are just unconditionally giving and don’t expect anything- they just want to continuously give.”

Q: How is transporting an animal by air different than driving a rescue animal?
“Its not like planning a car trip where you can just get in the car and go- you have to look at so many things because if you have a problem, you can’t just pull over to the side of the road and figure it out. I had a flight in the past where there was a problem with an aircraft and they shut the airport down, and I had to turn mid-air to another airport. Luckily, I was at a low enough altitude that I could quickly send a message to somebody and say, ‘hey, you need to go here because I can’t land at that airport because there’s an aircraft stuck on the runway. Things like that from time to time can happen.”

Q: Do you travel alone or do you bring someone with you?
“Normally I don’t [bring someone] just because that’s another place for a dog and I try to maximize the flights so that at the end of the year, I can say I flew this number of animals. I’m very much about efficiency when I can be. On occasion I will take people with me when I have people request to go with me, so if I can do it without sacrificing the animal transport side of it, then I’ll do it.”

Q: What are some supplies that you typically bring with you?
“My standard flight list is going to include my flight bag, which has my electronic flight book (basically an iPad with software on it), but I also carry paper charts in my bag with me in case my iPad would fail. I have my cell phone and some very basic things like that, and a head set. In case the headset would fail, I have a flashlight for after hours in case you need to see things inspection wise.   It’s all very basic but I try to put redundancy in everything so that if I do have something fail or break, I have a backup for it.”

Q: Is there any rescue transport that really stands out to you?
“I’ve had quite a few that stand out! One of the more difficult flights I’ve had, had a combination of weather issues and equipment failure of the aircraft. What had made it worse was it was the first flight I had taken with a faster airplane after I was checked out to do so. I had landed in Virginia and picked up my dogs, and as soon as I departed, my landing gear failed and immediately I started to panic. I cycled the airport a few times, put the gear down, and basically prepped for emergency landing. I was talking with my airport back home and asked them what they wanted me to do, and they said to just fly it back with the gear down. That added extra stress because when you fly with the gear down, you fly slower so you’re burning more fuel. Now I’m worried about fuel consumption, and this particular flight I had to drop two dogs off at two different airports. I ended up dropping the first dog off but calling my airport and saying I didn’t trust the aircraft to get to the next airport, so I then flew the airplane back to my home airport, took the dog that I had with me and switched airplanes, and then got him up to New Jersey where he needed to go. I had weather challenges getting into that airport, to the point where I questioned, ‘why am I doing this?’ At the end of the day, if what you encounter doesn’t kill you, it makes you better at what you do, and that’s the way I look at it. You learn something every time you do this, and every time there’s a problem, you now know how to deal with that problem in the future. In hindsight, its not really a bad thing.”

Q: Do you have any advice for someone who wants to volunteer as a pilot?
“My best advice would be to take this seriously. Become a decent pilot first and then slowly start to push your boundaries because if you don’t do this regularly, there are a lot of things that can throw a wrench in the works and cause a problem for you.   It is important to be cautious, especially because it involves airplanes.”

A big thank you to Paul, who is just one among many amazing animal rescue volunteers that selflessly devotes his time to help the animals. For ways that you can get involved in animal rescue, we recommend you check out Doobert.com, where you can volunteer as a transporter, foster home, and even a photographer.