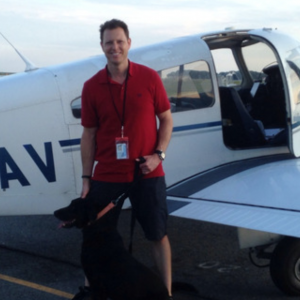 Founder, Pilots to the Rescue

Michael is an animal rescue pilot who started flying planes about five years ago, and began volunteering his talents by flying rescue animals in March of 2015. He has completed flights that have taught him how to make things go as smoothly as possible, and one rescue even ended up with a dog adoption by a celebrity! Pilots to the Rescue’s mission is to save potential pets facing euthanasia by flying them to safety using an advanced rescue flight system.

Q: If you could be any animal, what would you be and why?
“I think I would be a dog in a loving home. They seem to have it the best in this country.”

Q: What are some supplies that you always bring with you on a flight?
“I always bring calming treats just in case, because often times when you get animals that have been flown from other locations or a car, they can get a little rambunctious. I also have this high-density nutrition paste, like a vitamin gel, because you can’t give dogs a lot food when you’re transporting them, but sometimes they crash and you’ve got to give them a little something.”

Q: Is there a particular flight that stands out to you?
“I think one of the very first ones I did, we rescued ditch puppies that came from North Carolina. There was a litter of them and we really loaded up the plane, and it was one of the very first ones I had done so it was very rewarding. I’ve also transported a dog that had Cerebral Palsy and a family ended up fostering that dog.

Q: Are there any challenges you have faced?
“The hardest part really is loading them (the animal) in the plane. The planes are small, four-seaters and it’s like playing Tetris. Generally we don’t like to use crates, but inevitably, you’ll have an animal that just doesn’t get along or is injured, and you’ll need to isolate them. Usually we’ll deconstruct the crates because they’re quite large and then we’ll reconstruct them in the baggage compartment because they won’t fit through the baggage door. Then we’ll put the animal through the baggage door because usually the crate’s too big, but the animal will fit through. I prefer to tether the dogs which is what we usually do in the backseat- it’s just easier than dealing with a crate.”

Q: What does a typical flight look like for you?
“Typically a flight involves a relay with additional pilots, and it’s usually not just one pilot because the distances are just too great to drive. There’s a good deal of coordination between the origin shelter and the destination, to make sure that they have all of the paperwork and things like that. If you are relaying with other pilots, you text message them and just say ‘hey, I’m departing now and my ETA is such and such. While you’re sitting on the ground, the dogs are barking and they smell, so you want to get them off the ground as soon as possible because once you go into flight they usually fall asleep.”

Flying animals is just one of many ways to get involved in animal rescue. A big thank you to Michael and Pilots to the Rescue and all he does to help better the lives of animals.

For more information on animal transport and how to get involved, we recommend that you check out https://www.doobert.com/. Doobert is the leading online resource for animal rescue transport and automates the process for the volunteers.