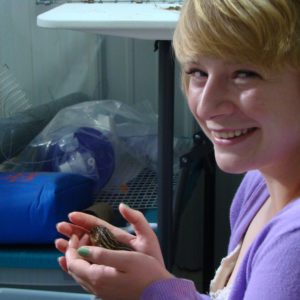 "Letting people know that they can choose a compassionate option for wildlife in need is a goal that’s always on my mind, and I try to convey that message as often as I can wherever I go.”

Cassandra is the owner of Fierce Hearts Wildlife Rehabilitation. She is a Wisconsin native Wisconsin who studied English, environmental education and captive wildlife before leaving school to pursue opening her own wildlife rehabilitation facility. Cassandra strives to provide exceptional care to the wildlife that is brought to her facility, as well as compassion for the community members who find wildlife in need.

Q: If you were an animal, what would you be and why?
“I’d be a red squirrel. They’re tough, they’re fast, they’re agile, and they don’t put up with any nonsense from other, bigger squirrels. Size doesn’t mean anything to them, and if something or someone is maybe a little too big to tangle with they’ll find the high ground and string out a series of chitters and squeaks that would make a sailor blush. Reds are independent, but will band together with other red squirrels for a greater goal. On top of all that, have you seen them fly across a pine forest? It’s incredible, I’m so jealous.”

Q: How did you get into wildlife rehabilitation?
“I think I’ve always had a desire or need to work with animals, and wild ones in particular call to me. Getting into the field itself can be tricky. I went to school at the University of Wisconsin – Stevens Point and studied environmental education and captive wildlife, and from there found the steps to acquiring my license. Wisconsin requires a person to have a “sponsor”, which creates something like an apprenticeship. Since a center didn’t exist in my area I turned my apprenticeship period into an opportunity to build my own place.”

Q: Is there any wildlife rehab situation that really stands out to you?
“A call came in once, or rather several calls, from a couple of different people, regarding a juvenile mouse. It was found lethargic walking through a room, presumably orphaned. As a rule, I can’t provide transport for patients, and this was around a 45 minute drive away. I spoke with two or three different callers, some of whom sounded concerned and some of whom sounded very exhausted, but I couldn’t speak with the man who’d found the mouse. All of the people I spoke to insisted it was impossible to transport the mouse, but wouldn’t detail why. I finally agreed to do a pickup. When I arrived at the address given there was a secured gate, I called in and spoke with a woman who opened up the gate and let the finder come out to meet me, while a couple of people in scrubs observed him from the door. He was very fragile looking, a barefoot young man holding this mouse on a hot water bottle. He told me how he’d found it, answered the questions on the intake form, and shook my hand after we’d prepped it for the drive. He had the proudest, brightest smile on his face, I’ll never forget how happy he was to have helped that mouse get care.”

“Another call came from a very elderly couple, 88 and 90 years old, regarding a litter of raccoon. I remember how sad he sounded when he told me he couldn’t drive them out to me, saying, “I understand you can’t come out, I suppose it’s just leave them to nature?” So of course, off I went with my partner for the pickup. They were the sweetest couple. They’d found two orphaned raccoons near their bird bath and had them neatly boxed up, box tied in twine to secure them. I heard a chitter and a lot of insect activity out in their woods, and asked if I could check it out, and the woman, Dolly, was absolutely thrilled when I found a third orphan – this one covered in fly strike. “Can you believe it! She just went right in there and found it! Just like that!” Her husband Hermann showed us a magic trick on our way out the door. I loved being able to help them, when they felt totally helpless in that situation.”

Q: Do you have any advice for someone who wants to get involved in wildlife rescue or rehab?
“Research what’s going on locally. Find out what your state’s regulations are, who is doing what with what species, what your region’s concerns are and how you can help alleviate the problems facing your community. Most importantly, be honest with yourself. Understand what you want to get out of rescue, and whether or not you’re ready for the toll that rescue takes. It’s a heartbreaking field that can be incredibly rewarding, but you have to be able to overcome that heartbreak to continue the passion. ”

Q: How do you bring awareness about wildlife rehab to your community?
“Through networking! Animal rescue is a tight community, it’s so important to get to know the people around you working with animals – whether they be dogs, cats, birds, rabbits or wild animals – and let them know that you’re helping, too. The more people I meet doing my job day to day, the more likely I am to meet a teacher who wants to bring ecosystem lessons into the classroom, or someone who works with dogs who knows someone else who runs a transport network. One of the most valuable things I ever did was walk into my local humane society with a stack of business cards and tell them if they ever got a wildlife call I was their gal. I’m working now on an education program so that I can bring wildlife ambassadors to the public and teach them about how to coexist with wildlife. Letting people know that they can choose a compassionate option for wildlife in need is a goal that’s always on my mind, and I try to convey that message as often as I can wherever I go.”