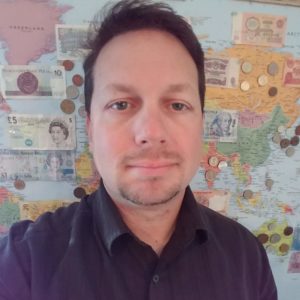 “At the end of the day, we know that we’re helping animals and we’re doing something that maybe other people who don’t have the resources or the ability, can’t do.”

Tom is one of four awesome volunteers who founded the organization, Pawsitively Famous (R.A.C.E), which is funded through the R.A.C.E team with help from Miranda Lambert’s MuttNation Foundation pet charity fund. Tom selflessly assists with the business management aspects of the organization.

Q: If you were an animal, what would you be and why?
“I would be a cheetah! I’m a runner, and when we started Pawsitively Famous (which is now R.A.C.E), one of the ways we would help raise funds for it was by collecting money when I would run marathons, so I think that’s a good fit.”

Q: How did you get started in animal rescue?
“It’s something that I was always interested in, and I basically started it with some friends with an idea. We had done our first transport as a way to help out a friend, and we organized some people that needed to get a dog from one part of Texas to another. It was something that we thought was fun, so we decided to keep doing it and eventually formed an entire not-for-profit organization around it.”

Q: How did you get into animal transport coordination?
“The first time we did it [coordination], we went through friends and informally said, ‘this person will drive this far, and the next person will drive this far.’ We sort of had the idea through group conversation among those of us who did the coordination, and I wondered how many other people needed something like this throughout the country. Then we started looking out for other opportunities.”

Q: Is there a memorable transport that sticks out to you?
“Miranda Lambert’s MuttNation Foundation is one of our sponsors. The first transport that we did involved a couple of us going to pick up her keyboard player’s dog late at night, about 2 o’clock in the morning, and I drove him all the way back to my house where he spent the night. Then his new owner came and picked him up the next day.”

Q: Is there anything you can recommend for someone who wants to become a transport coordinator?
“You need the ability to do some of the structured work that requires figuring out times and transition points along with people skills since you’ll be working with a variety of different people along the way.”

Thank you, Tom, for selflessly devoting your time and effort to better the lives of animals. For more information on animal transport and how to get involved, we recommend that you check out www.doobert.com. Doobert is the leading online resource for animal rescue transport and automates the process for the volunteers.